***To schedule a lesson,  please send form at the bottom of page***

The best way to develop good fundamentals is through baseball instruction from a former pro.  At The Baseball School we start with players as young as 5 years old to build a foundation of good mechanics. Players are taught the proper throwing, batting, and fielding mechanics to ensure success on the field, and prevent injuries that occur from improper throwing technique.

Whether you are looking to improve on your batting, fielding, or pitching,
Call 713-527-8338 today to get started.

Mark Quinn is a former Major League Baseball outfielder and right-handed batter who played for the Kansas City Royals.  Quinn was drafted in the 11th round of the 1995 Amateur Draft after playing two seasons for the Rice University Owls. While at Rice he was selected to the All SWC team in 1994 and 1995. In 1995 he was also voted to the ALL American team and was named the Rice Owlsteam MVP. On the 1995 team he was teammates with Lance Berkman and Jose Cruz Jr. In October of 2007 Mark was inducted into the Rice University Athletic Hall of Fame. Mark is the owner of The Baseball School and founder of the Houston Royals organization.
Career: In 1998, Quinn led the Texas League in batting average when he hit .349 for the Wichita Wranglers. He captured a second minor league batting crown the following year, posting a .360 average for the Omaha Golden Spikes of the Pacific Coast League. He was also named Rookie of the Year in the PCL in 1999, and voted best defensive outfielder in addition to winning the batting title. On September 14, 1999 Quinn became just the third player in MLB history to hit two home runs in his major league debut, joining Bob Nieman (1951) and Bert Campaneris (1964). In 2000 Quinn became the Royals regular leftfielder. He hit .294 with 20 home runs, earning him the Sporting News American League Rookie Player of the Year and a spot on the 2000 Topps All-Star Rookie Team. Quinn split the 2001 season between rightfield, leftfield, and designated hitter. Quinn played in the San Diego Padres, TampaBay Devil Rays, St. Louis Cardinals, and Chicago White Sox organizations. In four seasons with the Royals in the Major Leagues, Quinn batted .282 with 45 home runs, 167 RBI, 153 runs, 72 doubles, 5 triples, and 17 stolen bases in 293 games. In seven minor league seasons Quinn batted .305 with 103 home runs, 482 RBI, 415 runs, 179 doubles, 17 triples, and 30 stolen bases in 701 games

Ryan Weber
Ryan Weber is a former All District shortstop and graduate of Cy-Fair High School. After high school, Weber attended Eastfield Junior College in Mesquite, Texas. At Eastfield College, he was a Texas Junior College All Star and All Conference Selection in 2006. After his two year stint at Eastfield, Weber received a baseball scholarship to attend Temple University in Philadelphia, Pennsylvania. At Temple in 2007, he set the single season record for hits with 86 and was selected 2nd Team Atlantic 10 at shortstop. Weber decided to transfer to Sam Houston State for his senior season and come back to the state of Texas. In 2008, Weber help lead the Bearkats to the Southland Conference Tournament Championship while being selected to the All Tournament Team. He holds the record for most hits in a game with 5. After his playing career, Weber received his Masters Degree in Sport Management while serving as the Graduate Assistant Coach for Sam Houston State in 2009 and 2010.

Ben Bronson
Ben was a 2-sport athlete (baseball and football) at The University of Baylor. Upon completeing his collegiate career, the Kansas City Royals drafted Bronson where he played center field.  In addition to playing professional baseball, Bronson was also drafted to the NFL by the Indianapolis Colts as a wide receiver.

David Tittle
David Tittle is a former All District shortstop from Kingwood High School.  After high school David attended Blinn Jr College where he was the All Conference 3rd baseman for the Bucs, and was a member of the All Star team.  He hit .343 with 13 Hr's and 50 RBI his freshman year.  His Sophomore year he was selected again to the All Conference team at 1B.He posted another solid offensive season and hit .353 15 doubles 6 HR's and 40 RBI with a .963 fielding percentage.  David grew up playing select baseball in Houston as was a player with the Houston Heat from 2003-2008.

Christian Staehely
Christian Staehely is a former right-handed Minor League Baseball pitcher who played for the Seattle Mariners Organization. Staehely was a 39th round draft pick by the Mariners in the 2008 Amateur Draft and played two years within the Mariners' system. He played collegiate baseball at Princeton University and spent two summers in the prestigious Cape Cod Baseball League with Cotuit.  In addition to playing professionally in the U.S., Staehely has played professionally in Italy as well as winter baseball in Australia. He is also a current pitcher for the Swedish National Team.  A Houston native and Lamar High School graduate, Staehely is looking forward to spreading knowledge and passion for the game of baseball which has given him so much. 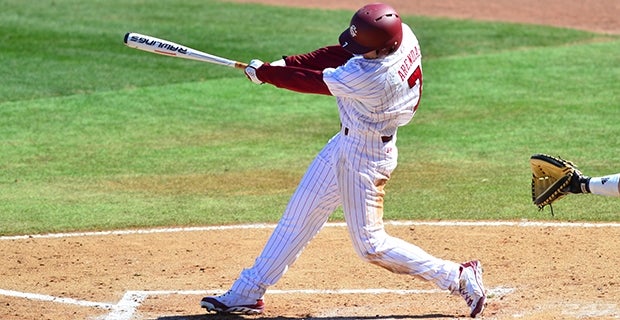 DC grew up in Greensboro, North Carolina where he attended Northern Guilford High School. He spent his prep years playing for the Dirtbags Travel team coached by Andy Partin. After graduating from Northern, he attended the University of South Carolina where he was a 3 year starter. His favorite part of college was helping a team that missed the postseason for the first time in decades, respond the following season by winning the SEC East Championship and advance to the Super Regionals. DC set and currently holds several fielding records for the Gamecocks. After graduating from South Carolina, he interned for the Carolina Panthers and worked in a player development/equipment role for the New England Patriots.


The captcha you entered is incorrect. Please try again.

All prices are in USD.